The U.S. economy expanded at an annualized rate of 1.9% in the third quarter of 2019 despite contracting levels of nonresidential investment, according to an Associated Builders and Contractors analysis of data released by the U.S. Bureau of Economic Analysis. Nonresidential fixed investment declined at a 3% annual rate in the third quarter after declining at a 1% rate in the second quarter.

“Today’s report reinforced a number of observations regarding the U.S. economy and the nation’s nonresidential construction sector,” said ABC Chief Economist Anirban Basu. “First, the economy is slowing. While consumer spending and government outlays remain elevated, gross private domestic investment continues to slip, this time by 1.5% on an annualized basis in the third quarter. While this is less than the 6.3% decline registered during the second quarter, the key takeaway is that the current economic expansion is narrowing, increasingly fueled by consumers and public agencies taking on additional debt.

“The primary question now is whether the slowdown in economic activity will persist into 2020,” said Basu. “Many factors suggest it will, including a weakening global economy, a U.S. manufacturing sector that is arguably already in recession, vulnerability attributable to massive accumulations of public, corporate and household debt and the uncertain outcomes attached to ongoing trade negotiations. On the other hand, U.S. equity markets have continued to surge higher in the context of better-than-expected corporate earnings and ongoing accommodation by the Federal Reserve. Put it all together and the outlook for the U.S. economy has seldom been more uncertain, especially given next year’s elections. 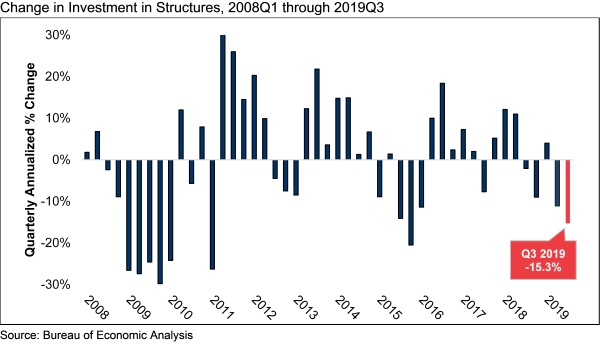 National nonresidential construction spending fell 0.7% in October but is up 1.4% compared to the same time last... END_OF_DOCUMENT_TOKEN_TO_BE_REPLACED

Construction input prices remained unchanged on a monthly basis in October but are down 2.2% year-over-year, according to... END_OF_DOCUMENT_TOKEN_TO_BE_REPLACED